Come to find out, there were two updates, both of which for Microsoft’s IE 9 Beta. The first was an update to resolve a Feedback issue that users (including myself) have been having when running IE 9 Beta on a 64-bit Windows 7 and Windows Live Essentials 2011 (it must meet those criteria). Essentially, when trying to send feedback via the Tools menu in IE9, the pop-up that appeared would continuously notify users that they needed to update or install the Windows Live ID Sign-In assistant. Most users will find that they actually have this tool installed, but somewhere along the lines from IE9 to transmitting the data, there was a bug. That bug is now fixed with this update, KB2452648, fixes this issue and allows users to continue submitting feedback on IE9. After the update, users can easily log into Microsoft Connect using their Windows Live ID. 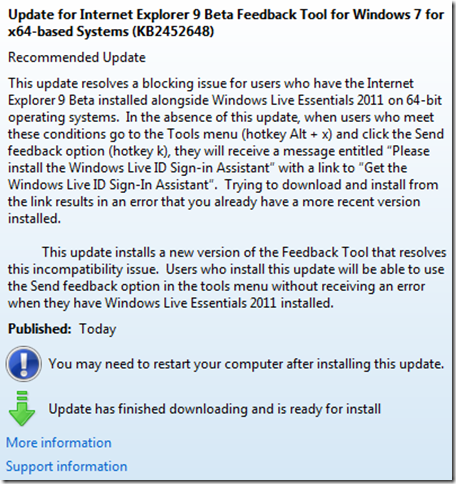 The other update, KB2448827, addresses reliability and performance issues that the IE 9 Beta has experienced. No beta is perfect, and I can definitely say I’ve had one or two issues with the IE 9 Beta (all of which are to be expected, of course).  Only time will really tell whether or not this update improves the reliability and ultimately the usability of the IE 9 Beta. Here’s a brief statement on it via Microsoft’s Windows Update: 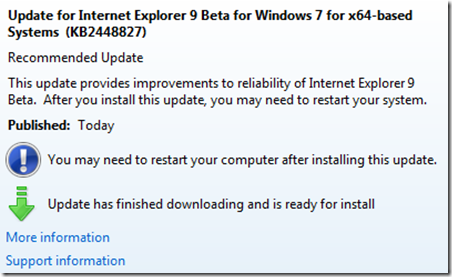 Microsoft released Internet Explorer 9 Beta back in September of this year. It’s so far received excellent reviews by several software reviewers and testers. IE 9 takes the best features of HTML 5 and helps implement them as efficiently and effectively as possible. For those who wish to test IE 9 Beta for themselves, feel free to download it via Microsoft’s official IE 9 Beta download site.